After many months of preparation and hard work the big day arrived, time to fly out to Mexico and compete at the Para Pan-American Games in Guadalajara. It was not only exiting for me to be swimming at such competition but also great to visit Mexico again after 11 years. As I arrived at the airport, the music, the smell and the color started to bring some memories back. I was in Guadalajara a city of Mexico that I had not visited before but it defiantly had the essence of that rich culture that is found anywhere you go in the country. I was very happy while I was riding the noisy bus without A/C from the airport to the village, it was almost unbelievable for me to be there. Everything was new to me but still with the very familiar latin flavor. After arriving at the village and having a quick lunch it was time to raise the American flag and acknowledge the presence of the Team USA. Mexico prepared a welcoming event, full of colorful dresses and typical dances from Jalisco. The rooms were ready for us to occupy and the people were very hospitable. Right after that same day was our first time training and seeing the pool. It was great and the staff was welcoming and happy to have all of us there. The opening ceremony of the games was not until the third day and defiantly one of the best moments of this trip. As we were organizing the teams for the ceremony we were gathered in a private area for athletes only where they had a party or as they called it “La Fiesta de America”. I think that this was my favorite moment when I saw all the people regardless of country, language or culture dancing to the same rhythms all together. As we entered the stadium as a team I was very proud to be part of Team USA the country that is my home and has open so many great opportunities for me including this one as one of the bests. All week the village was a celebration for me. I was speaking Spanish and receiving the best complements on my ability to speak it so well while being from the USA. Towards the end they all found out where the Spanish with no accent came from. I guess is hard to hide a Cuban and I am always happy to show it off. 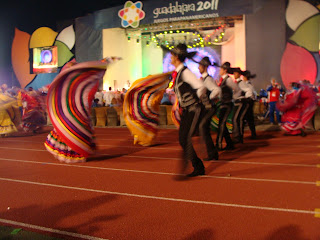 Performance at the Opening Ceremonies!!
At the pool life was very active; the stands were full with a very energetic crowd.At the level of the pool it was the space to make friends with people from other teams, we were located between the Argentinean and the Mexican teams, with whom we exchange pins and some funny moments. When looking to the stands from the pool deck we could see the Mexican flags covering the space but on the day of my competition this pattern was interrupted by my family that brought and American flag to support our team, which would stand out among the many Mexicans. It was overwhelming to presence this moment.   I was about to start racing and the stadium was euphoric and cheering for every single athlete. At the moment of the race it all came down to sticking to my strategy and staying as focused as possible, although after the previous description this defiantly became a challenge. My time on the 100BR was good I broke the Para-Pan-American record but Mexico decided not to Medal my class, the reasons are unknown by me. I am happy with my swim and I look forward to the upcoming competitions. The next one will be December 8th , 2011, yes… I have to compete again!! This time in La Mirada, California where I hope to have part of my family coming to watch I look forward to it!!! 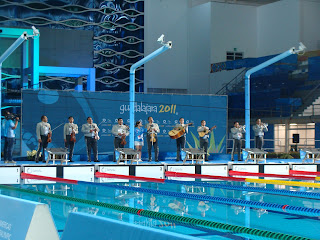 Mariachis took over the pool!!!
Posted by Ileana Rodriguez at 10:18 PM

A little about me...

I was born in Matanzas, Cuba, a city with many rivers that ended in a beautiful bay that I had the luxury of seeing every morning on my way to school. Swimming was part of the everyday life, the beach was the public space of the neighborhood. All the kids on my block knew how to swim and "El Tennis" - the small beach right across from our houses - was our playground. At the age of seven I started swimming in a team with other kids, and competing as well. This brought my love for the sport to a different level, and not only did I want to swim for the fun of it, but I also wanted to be fast at it!!! However, after a few years of training hard everyday, I decided to try a new activity and rest a little from swimming. This time it was ballet dancing what I pursued, but I only practiced it for three years until a rare illness - AVM of the spine - affected my body and left me in a wheelchair.
This incident made me realize how important was swimming for me. I knew that the water was the only environment where my body would feel normal again. It allowed me to discover that the wheelchair was only an obstacle to do some things but not the ones I love the most.
At the age of 15 a new adventure started, our family started a new life in Miami, Fl, which I consider home today. There I decided to go back and do competitive swimming for Palmetto High School, the experience was great, I swam against able body athletes and proved one more time that the wheels did not defined me. After high school, college began and swimming had to start playing a secondary roll while school was the priority, although the love for the sport was always there. During my third year of college, it was time to go back and this time with a BIG dream, become part of the US Paralympic Team. Together with my coaches Andrew and Belinda Philips and with Flying Fish Swim Club I had the support that allowed me to compete in trials for the China games in 2008. I did not become part of the Paralympic team that year but it was the beginning the great journey I am living today and I welcome you to join.